Thank you to our GREAT Republican Members of Congress for your VOTE to fund Border Security and the Wall. The final numbers were 217-185 and many have said that the enthusiasm was greater than they have ever seen before. So proud of you all. Now on to the Senate!

Soon to be Speaker Nancy Pelosi said, last week live from the Oval Office, that the Republicans didn’t have the votes for Border Security. Today the House Republicans voted and won, 217-185. Nancy does not have to apologize. All I want is GREAT BORDER SECURITY!

UPDATE: If the government does shut down, the president is staying put.

.@PressSec says @realDonaldTrump will not travel to Florida for Christmas if government agencies shut down due to budget impasse.

ORIGINAL POST
The House of Representatives approved a spending bill Thursday that includes $5.7 billion to build President Trump’s proposed wall on the U.S.-Mexico border. It passed by a vote of 217-185, with no Democratic “yeas.” The legislation now heads to the Senate.
Among those who voted for the bill were the members of the conservative House Freedom Caucus.

“Republicans in Congress have continually told the American people that we would fight for wall funding, and today the House of Representatives took its first step toward fulfilling that promise,” the group said in a statement after the vote. “The Senate must follow our lead. It’s time we do what we said and work with President Trump and the American people to secure our borders.”
The Freedom Caucus introduced an amendment Wednesday night and gave a series of impassioned speeches about how the president had a duty to keep his promise to the American people. To have border security, the likes of Rep. Jim Jordan (R-OH) said, they had to fund the wall. He called it “common sense.”
The Democrats don’t see it that way. On Wednesday night the Senate passed a funding bill that does not include money for the border wall.
Considering Chuck Schumer and Nancy Pelosi already insisted, in front of cameras at the White House last week, they are not paying for the border wall, we seem to be heading toward a partial government shutdown. The deadline is Friday.

Last week Trump said he’d be “proud” to shut down the government for border security.
Following Thursday’s vote, Republicans implored their colleagues to fund the wall. 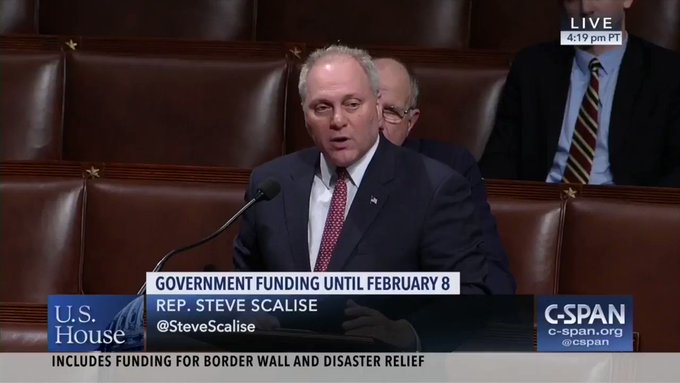 The House just voted to fully fund the border wall. Democrats have to decide: are they for open borders or open government?

Bill passed in House tonight reasonable.
It has $ for 2 important priorities: border security & disaster relief.
No legitimate reason for Dems to shut down government over this.
They voted for $800 billion for Obama stimulus but won’t vote for $5 billion to secure our border?