Joe Biden’s 2020 presidential campaign continues to encounter one bump after the other. From countless blunders to sexual assault allegations and claims that black Americans “ain’t black” if they don’t support him, the previous vice president continues humiliating himself before the nation.
As time goes on, Americans are repeatedly given evidence that Biden lacks the qualifications and cognitive abilities to serve as president. Despite this, Biden’s aides and allies keep propping him up and the Democrat Party is right behind him. 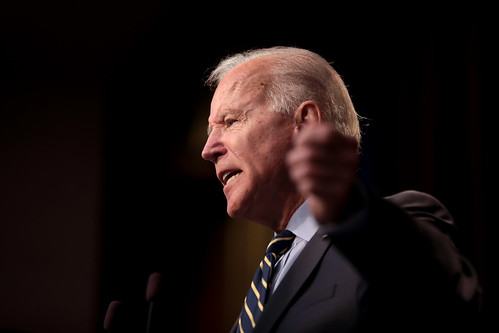 Notwithstanding the support that the ex-vice president is getting from the left, more and more people are seeing right through him. One of the latest critics of Biden is the director from the National Association of Police Organizations, reports Fox News.

During a recent interview Director Bill Johnson called out Biden, stating that the presumptive Democrat nominee is “off the deep end.” This assessment comes as Biden continues to urge for the restructuring of the police force.
In so doing, the former vice president is caving to his radical base that hates law enforcement and has gone as far as calling for the police force to be defunded. Johnson also noted that Biden is “moving left” politically, despite his team’s work to market him as a moderate Democrat.

I wish I could say this hate began with Donald Trump and will end with him. It didn’t, and it won’t. American history isn’t a fairytale with a guaranteed happy ending.

It's up to all of us to create the America we know we can be. pic.twitter.com/LNI2e3d3lz

The director of the National Association of Police Organizations isn’t the only one to call out Biden either. Like Johnson, President Trump also stated earlier this week that Biden is moving further to the left. This shift in the former vice president continues to occur as the Democrat base becomes collectively more radical and socialist.
What do you think about the current state of Joe Biden? Does he have what’s necessary to compete in a presidential election? Let us know in the comments section below!