As America gradually works to get back to normal, decisions on whether or not to hold public events remain highly controversial. Some people believe that temperature checks and other precautions are enough to safely gather with others; however, many people still believe that congregating is too dangerous.
All of this is going on right as the nation’s two major political parties are set to hold their conventions. While Republicans are committed to an in-person convention, the same cannot be said about the Democrat Party; as a matter of fact, some Democrats are openly entertaining the idea of a virtual convention. 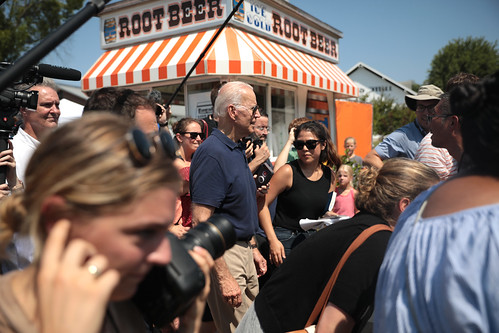 As the possibility of a virtual Democrat National Convention is discussed, this has put 2020 candidate Joe Biden under a microscope, according to Breitbart News.

Why Do Democrats Want a Virtual Convention?

Right now, the possibility of COVID-19 transmission is the reason Democrats are citing in talks about a virtual convention. The common claim here is that gathering is too dangerous and risky; this assessment notably comes in spite of Democrats supporting Black Lives Matter gatherings, even those without social distancing.
However, not everyone is buying what the Democrats are selling. As a matter of fact, some Americans believe that a virtual Democrat National Convention is being floated as an idea to “hide” Biden from the public.

This is something noted by first son Donald Trump Jr. during an interview with Fox News. The eldest first son branded Biden as the “epitome of the swamp” before stating that his father’s political rival can’t foster enthusiasm amongst his base or attract them to rallies.
Additional messages from Trump Jr. conveyed that the more unfiltered exposure Americans have of Biden, the less likely they are to truly support him.

The Democrat nominee continues to push back against criticism he faces from conservatives. Much of this pushback entails going after President Trump and doing all he can to paint the 45th president in a negative, unfavorable light.

Health care is personal to me. And as president, I'll do everything I can to make sure every American has access to the care they need. pic.twitter.com/Rmwsmx54KW

Biden also continues to tout his own policies as effective solutions to problems he claims Trump created. This includes, but isn’t limited to, promises to “transform” America and “rebuild” the country’s economy.
The president and his team have responded to these messages by picking apart the former vice president’s policies and noting Biden’s concerning actions that indicate cognitive decline.
What do you think about Democrats’ interest in holding a virtual convention? Do you think Biden’s allies are attempting to hide him from Americans? Let us know down below in the comments section.