For a decent amount of time now, conservatives have balked at the idea that Joe Biden is a moderate Democrat.
Attempting to market himself as a moderate is a strategy that the former vice president adopted throughout the early stages of the primary election. Biden pretended to contrast himself with more openly radical Democrats like Bernie Sanders and Elizabeth Warren; furthermore, Biden has used the mirage of moderatism in the hopes of appealing to certain Republicans. 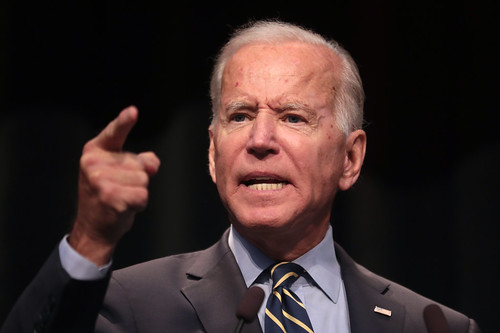 However, as many conservatives predicted, Biden is moving further and further to the left in order to appease his party. Now, reports from Breitbart News affirm that Biden’s quest to score brownie points from progressive Democrats is working.

What to Know About the Policies and Candidacy of Joe Biden

On the primary debate stage, Joe Biden appeared to differ from candidates like Bernie Sanders and Elizabeth Warren who don’t even pretend to brand themselves as moderates. However, fewer people are aware that many of Biden’s policies are being made with the input of…Sanders and Warren.

Because of Trump's ineptitude the pandemic is getting worse. He must be defeated. pic.twitter.com/XgIGtRrnKl

In fact, multiple parts of Biden’s plan to “transform” America’s economy are in place because of input from Warren. The former vice president has also worked with the likes of not only Sanders, but also Alexandria Ocasio-Cortez. Each of the aforementioned individuals remains openly supportive of radical left policies such as a Green New Deal, open borders, etc.
The notion of Biden being a moderate candidate seeking the White House continues to be proven as a falsehood.

As the 2020 presidential election plays out, conservatives continue to warn about the true nature of Biden’s candidacy.
In recent weeks, Vice President Mike Pence has amped up censure of Biden. The vice president slammed Biden for an interview in which the latter called to defund the police. Last week, Pence also warned that Biden is a “trojan horse” for an extreme, radical left-wing agenda.

@VP @Mike_Pence: Joe Biden Would Be Nothing More Than An Autopen President A Trojan Horse For A Radical Agenda. So radical so all-encompassing that it would transform this country into something utterly unrecognizable.#TrumpNowMoreThanEver2020 #MAGA #Trump2020 @realDonaldTrump pic.twitter.com/L3zC5U4m31

Ultimately, conservatives are warning that Biden would bring socialism, decline, envy of others, and worse to the nation, if elected as president. Other people on the right have pointed out indications that Biden is suffering from mental decline and wouldn’t have the stamina to lead the nation.
Over the past several months, the former vice president has remained hidden in his basement. Only recently has Biden emerged for certain controlled media interviews.
Do you think Joe Biden is a radical posing as a moderate Democrat? Share your thoughts with us in the comments section below!