Throughout the time that Joe Biden has run for office in the 2020 presidential election, the stain of socialism is one that he hasn’t managed to remove.
The facade of being a moderate Democrat simply doesn’t align with the policies that Biden has chosen to adopt; in fact, the former vice president has repeatedly moved further to the left in order to appease the growing number of radicals within his own party. 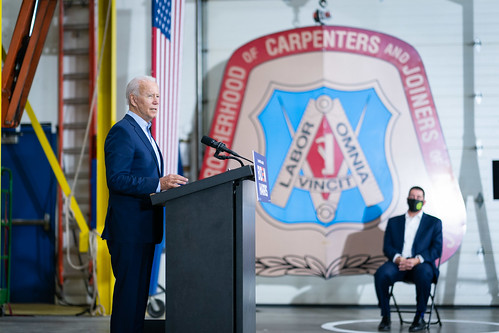 However, it appears as though Joe Biden doesn’t want the nation to think of him as a radical socialist. On Monday, the former vice president threw Bernie Sanders under the bus, professing during an interview that he “beat the socialist,” notes Washington Examiner.
Some pundits believe this move could backfire on Biden within his own party and dissuade Sanders’ supporters from voting for him.

The Struggle to Escape the Socialist Left

Earlier this week, the former vice president engaged in an interview with an affiliate for Fox while campaigning in Wisconsin. During the socially distanced interview, Biden faced a question about the widespread notion that his campaign is merely a trojan horse for socialism.

Here’s @JoeBiden dissing Sanders & confirming (in case you didn’t know) that his record is not left, saying he, “beat the socialist!” This, after Sanders has campaigned extensively for him. Surely that will convince Sanders supporters to vote for him. pic.twitter.com/9R495iergO

Biden firmly denounced this notion, even professing that he “beat the socialist.” The 2020 Democrat nominee then went on to state that he’s “never broken [his] word” and won’t raise taxes on individuals earning less than $400,000 annually.
The former vice president then encouraged his critics to observe his political career as proof that he’s “not” a socialist.

In Biden’s haste to prove that he’s not a socialist, his remarks offended certain Democrats…and socialists.
Many leftists have noted the extent to which Bernie Sanders has campaigned on behalf of Biden. While the 2020 Democrat boldly claims that he “beat the socialist,” the same socialist has still significantly impacted the policies that he’s committed to enacting upon winning the 2020 election.

Cindy — I'm deeply honored to have your support and your friendship. This election is bigger than any one political party. It requires all of us to come together as one America to restore the soul of the nation. Together, we'll get it done. https://t.co/Cwv27QuNVo

Likewise, Biden’s “I beat the socialist” line is already causing socialists within the Democrat Party to take umbrage. As a matter of fact, Democrats have become openly more radical, fringe, and socialist; talks of “burning it all down” and ripping down U.S. monuments are increasing in popularity among the Democrat Party.
Despite Biden’s claims on Monday, many Americans still believe Biden remains under the thumb of socialist handlers. He did, after all, receive an endorsement from the Communist Party in America.
Do you believe that Joe Biden is a socialist in moderate’s clothing? How will Sanders’ supporters react to Biden’s latest statement? Let us know down below in the comments section.