In presidential elections, interactions with the media make a huge difference. Coronavirus or not, the American people want to know as much about their candidate choices as possible. This means participating in press conferences, answering questions from reporters, and not hiding away in a basement. 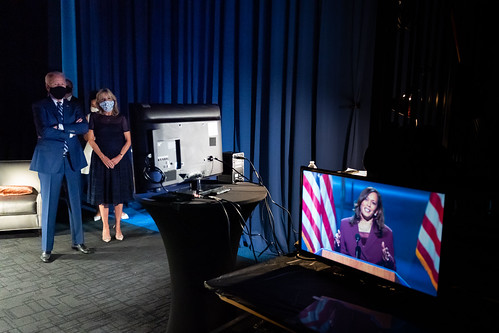 President Trump continues to remain actively engaged with the press. Unlike Joe Biden, the president is not hiding away; instead, he’s traveling across the nation, speaking to reporters, and engaging with supporters in different parts of the country.
Biden and his running mate, Kamala Harris, are not doing the same and Americans are noticing. Earlier today, a reporter slammed Biden and Harris for lacking “momentum,” according to Fox News.

Why Biden-Harris 2020 is in Trouble

Joe Concha, a media reporter for The Hill, didn’t leave anything unclear when censuring the campaign strategies of the Biden team. Concha explained that while President Trump and his aides are consistently before the media, Biden and Harris are not.

We run this campaign led by the values that guide my life – honesty, integrity, and compassion. @KamalaHarris and I are hard at work and want to let you into the conversation.

Join us this Tuesday. pic.twitter.com/zu0QDka23i

The media reporter also criticized the announcement from Biden’s team that in-person campaigning won’t commence until September 10. After slamming this strategy, Concha explained that by not conversing with the press or the American people, Biden is setting himself up to be “defined by [his] opponent.”

The Perception of the Biden Campaign

Concha’s criticisms of Biden did not stop with noting his lack of media appearances. The media reporter also pointed out that as riots tear across the nation in Democrat-run cities, the former vice president and his running mate appear “weak.
Shortly thereafter came Concha’s remark that Biden ought to be talking about actions he’d take to stop riots across the country. However, since the former vice president is not doing this, Concha maintains that declining poll numbers are merely inevitable.

As we remember the lives of George Floyd, Breonna Taylor, Ahmaud Arbery, and so many more whose lives were cut short, we must commit to reforming policing—ensuring officers face accountability and consequence for abuses of power. pic.twitter.com/k1mD4Dz5QV

The reality and progression of the 2020 presidential election appear to support the takes from The Hill’s media reporter. At this time, #BidenRiots is trending on Twitter; meanwhile, national polls that once showed Biden leading Trump are getting tighter with the president gaining ground on his election rival.
Meanwhile, through all of this, Joe Biden remains in his Delaware basement. Trump, on the other hand, continues to warn that violence in cities like Kenosha, Chicago, etc., will become national if Biden gets into the White House.
Do you believe Joe Biden is sabotaging his own campaign by hiding from the media? Let us know in the comments section below!