During Joe Biden’s Democratic National Convention acceptance speech, he covered a series of topics.
Despite facing multiple accusations of sexual assault and being caught on camera stating that black Americans who don’t support him “ain’t black,” the former vice president vowed to be an “ally” for the light instead of the darkness. While speaking at the DNC, Biden also confirmed that he would instate a national mandate for Americans to wear face masks. 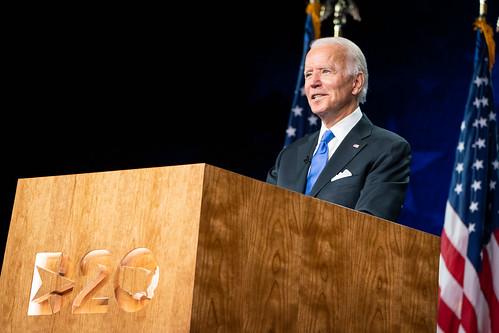 “Joe Biden Accepts the Nomination for the” (CC BY-NC-SA 2.0) by Biden For President

While Biden covered additional areas including climate change, economic regression, and the various areas where he believes President Trump has failed, the former vice president did not mention crime or police in America.
These are two very critical and relevant topics in the nation at this time; therefore, Biden is facing backlash for leaving these subjects out of his acceptance speech, confirms Fox News.

The Detachment from Reality

On Friday, President Trump participated in a sit-down, Fox News interview. During this time, the 45th president covered a series of matters, one of them being Biden’s refusal to discuss crime and policing in America while accepting the presidential nomination from the Democrat Party.

President @realDonaldTrump: If you want a vision of your life under Joe Biden, imagine the smoldering ruins of Minneapolis, the violent anarchy of Portland and the bloodstained sidewalks of Chicago coming to every city and town in America pic.twitter.com/Wcmfw2CQIN

Like many other Americans, the president noted the riots happening in cities like Portland and Chicago as the Democratic National Convention took place. In spite of this, Biden (and other speakers at the DNC, for that matter) didn’t, at all, talk about law enforcement in America, calls to defund police, or the violent riots happening across the nation.
Trump ultimately branded Biden’s DNC acceptance remarks as “the shortest speech” and noted that what the former vice president “didn’t say” was most problematic.

Where Does Biden Stand on Crime and Law Enforcement?

Weeks ago, the former vice president stated that funding should be redirected from police departments.
Since this time, Biden has attempted to walk this statement back, claiming that he is not supportive of defunding the police. During his first joint news interview with running mate Kamala Harris, Biden actually claimed that President Trump is the one who seeks to defund law enforcement. Objectively, this is simply not accurate.

EXCLUSIVE: Asked about Pres. Trump's charge that he wants to "defund the police," Joe Biden tells @RobinRoberts, "No I don't"—and counters that the Trump administration has proposed cutting a federal program that helps hire more local law enforcement. https://t.co/HOks1fmoGv pic.twitter.com/5XlRrdkjOo

Many police and law enforcement groups across the nation believe that Biden has taken a lackluster attitude towards crime without being an ally to law enforcement. This is one of many reasons why multiple law enforcement organizations have endorsed President Trump’s candidacy for a second term in the White House.
What did you make of Joe Biden’s acceptance speech at the Democratic National Convention? Why do you think he chose not to discuss law enforcement or crime happening in major U.S. cities? Let us know your thoughts in the comments section below!