Endorsements play a vital role in any politician’s presidential campaign. Depending on the candidate, party, etc., getting certain endorsements can lead to more support, stronger allies, and even financial gain.
President Trump is a prime example of the monumental role that endorsements can play in a political election. Unlike Democrat rival Joe Biden, President Trump has received endorsements from union groups, countless law enforcement associations, and more. 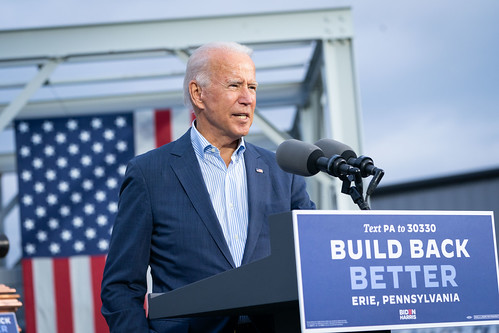 Another differentiating factor between Trump and Biden is that while the former never lies about which endorsements he received, the latter most certainly does.
Yesterday, the Pennsylvanian group known as Boilermakers Local 154 union slammed Joe Biden for falsely claiming that they endorsed his candidacy. As a matter of fact, this particular union has endorsed Donald Trump twice now — once in 2016 and once in 2020, according to reports from Breitbart News.

The Truth About Boilermakers Local 154 Union

Last Wednesday, Biden sat down for a town hall event in lieu of the previously planned second presidential debate. During this period, the former vice president answered a series of questions from various Americans in the audience. Likewise, Biden also worked to make the case for why the nation should vote him into office.
During one period, Biden overplayed his hand by deceitfully stating that the Boilermakers Local 154 union endorsed him for president of the United States. The Democrat candidate for president professed that this supposed endorsement arrived after a conversation about his energy plan.

Another day, another @JoeBiden LIE.
An official at one of Pennsylvania's most powerful labor groups, Boilermakers Local 154, slammed Biden for falsely claiming the union's endorsement. They endorsed @realDonaldTrump due to Biden’s criticism of fracking!

Well, Boilermakers Local 154 union wasted absolutely no time in pushing back against this fake news. John Hughes, the leader of the union, stated on Saturday that at no point did the Boilermakers Local 154 union ever endorse Joe Biden.
Hughes additionally noted that the union declined to endorse the Obama-Biden ticket during their runs, due to the team’s position on energy.

The Downward Spiral of the Biden Campaign

News of Biden’s lies about the nonexistent endorsement from a Pennsylvanian union group arrives after multiple other criticisms towards the former vice president.
For starters, many Americans don’t think Biden has the mental ability to lead the nation as president. Likewise, the Democrat candidate keeps getting panned for low attendance at his events, flubs made while speaking, and more.

Last year, CNN’s John King pointed out that Joe Biden is refusing to answer questions about his son Hunter getting massive amounts of money from foreign countries while Joe Biden was VP.

A year later, Biden is still refusing to tell voters the truth! pic.twitter.com/HPYcTG5Ab8

This week, however, the Biden campaign will move to offset the damage they’ve absorbed. This will take place on Wednesday when Barack Obama campaigns for Biden in Pennsylvania.
Are you surprised that Joe Biden lied about the Boilermakers Local 154 union endorsing him? What else do you think Biden is lying about? Let us know down below in the comments section.