Roughly 24 hours ago, the nation learned that President Trump, the first lady, White House reporters, and others tested positive for the infamous coronavirus.
Earlier in the day, the president and first lady were said to be in quarantine at the White House; however, by yesterday afternoon, the nation learned that President Trump would be transferred to Walter Reed Hospital, following recommendations from medical physicians. 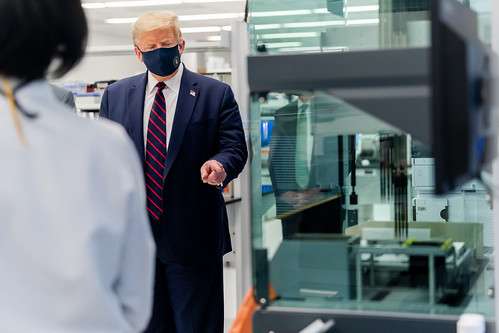 The news has significantly impacted the nation with Americans of all political backgrounds and leanings weighing in. Certain folks on the left, such as Barack Obama, have interestingly enough wished the Trumps well in their recovery.
Yesterday, Americans also learned that Joe Biden will be terminating all negative ads aimed at Trump, following the latter’s positive COVID-19 diagnosis, documents Breitbart News.

What to Expect from the Biden Campaign Going Forward

Biden’s campaign has announced that they will not air ads that attack the president, due to the latter’s ongoing battle against COVID-19. According to a Biden staffer, putting out anti-Trump ads would conflict with the 2020 Democrat nominee’s public well wishes towards the president and first lady.

We have to come together. pic.twitter.com/P8SkE6vkX1

The Biden team is set to continue campaigning, however. On Friday, Biden traveled to Michigan in order to win over more voters; during this time, the former vice president wore a face mask throughout his speech. Biden also remained heavily socially distanced from other individuals.
Amid Trump’s positive coronavirus test, both Joe Biden and his wife also underwent screening for the virus; ultimately, however, both Bidens tested negative for the virus, thus prompting the continuation of the campaign on Friday.

The Future of Trump-Biden Debates

Up until yesterday, Trump and Biden were set to debate each other two more times, once on the 15th and for a final time on the 22nd.
However, in light of President Trump testing positive for the virus, the future of Trump-Biden debates remains up in the air. The president’s recovery is set to take some time; meanwhile, the average quarantine time following contact with COVID-19 ranges between ten to 14 days.

Joe Biden was attacking President Trump as he was preparing to head to the hospital. https://t.co/RORFdlBzNR

President Trump’s campaign has also put a hold on events that would involve Trump or members of the first family. However, Mike Pence, who tested negative for the virus, is set to contine campaigning. The vice president of the United States remains scheduled to debate Kamala Harris this upcoming Wednesday.
Do you think Americans will see any more debates between Trump and Biden? How much time do you believe the president will need to fully bounce back from COVID-19? Let us know in the comments section below!