Numerous Americans possess concerns about the integrity of 2020’s general election. These concerns have not been alleviated by the Democrat Party’s push for mail-in voting, a method of voting that is ripe with propensity for fraud.
The left claims that in-person voting is too dangerous; however, this supposed danger apparently doesn’t apply to top Democrats such as Joe Biden. Earlier this month, Biden, who has strongly pushed for mail-in voting (while citing in-person voting as too dangerous amid coronavirus) actually voted in-person himself for the Delaware election. 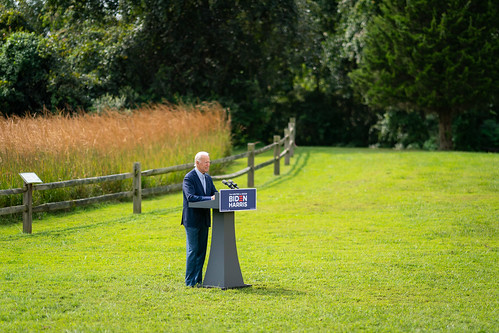 “Remarks on the Climate Crisis – Wilmingt” (CC BY-NC-SA 2.0) by Biden For President

Another cause of concern regarding the 2020 presidential election is ballot harvesting. Put simply, ballot harvesting takes place when “third parties” go across communities to gather ballots and then transfer them over to the city’s election office.
Ripe with opportunities for corruption, Hawaii Rep. Tulsi Gabbard (D) is working across the aisle with Illinois Rep. Rodney Davis (R) to ban ballot harvesting.
Unfortunately, however, ballot harvesting is a practice that multiple blue states already approved for this year’s election, confirms Townhall.

What Americans Must Know About Ballot Harvesting

On Friday, Gabbard tweeted out against ballot harvesting. The former 2020 Democrat explained that opposition to such a practice shouldn’t be a “partisan issue,” however, California, Michigan, and several other notably blue states are still allowing it.

Banning ballot harvesting is not a partisan issue. It's been used & abused in states like North Carolina and California & is ripe for fraud.

That's why I intro'd HR8285, the Election Fraud Prevention Act w/ @RodneyDavis – to protect the integrity of our elections & our democracy pic.twitter.com/ltZhaenSVB

Ballot harvesting remains largely political with most Democrats dismissing Americans who express concerns about it. Nonetheless, Gabbard stated that her co-sponsored legislation with Davis shields ballots’ “chain of custody” by banning the funding of states that permit ballot harvesting.
It’s also worth noting that states which allow ballot harvesting have chosen to impose zero restrictions on individuals able to gather and deliver ballots.

Many Democrats regularly assert that President Trump is a threat to the integrity of this year’s presidential election; however, the reality simply doesn’t support this claim.
Right now, Democrats are telling Americans not to vote in person, despite doing so themselves. The left claims that mail-in voting is the only safe way to have a voice in this year’s election; however, Democrats have yet to articulate concerns about gatherings that involve the promotion of leftist agendas.

If you REALLY believed the voters should pick a president, you would publicly end the ballot harvesting, the vote count extensions and all of the voter fraud the Democrat party is trying to push.

Republicans have largely maintained that if Americans can protest and riot in person, they can also vote in person. Unfortunately, though, the left appears determined to push for mail-in voting and ballot harvesting until the bitter end.
Do you have concerns about ballot harvesting in the United States? How do you believe this will effect the 2020 presidential election? Let us know down below in the comments section.