For many weeks now, the voices and calls from Black Lives Matter have increased. The group has managed to pressure certain Democrat mayors into defunding local police departments; meanwhile, Black Lives Matter is calling to defund the police and alleging that systemic racism remains rampant and everpresent in the United States.
Despite Black Lives Matter’s strong support from Democrats, they are not without critics or detractors. Many Americans have slammed the group for vilifying officers and painting the United States as a terrible, racist place. 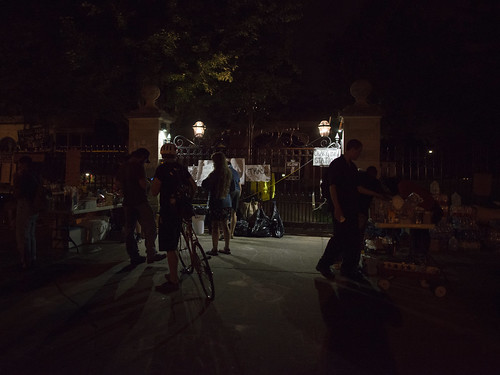 “Food area outside the Governor’s Mansion” (CC BY 2.0) by Fibonacci Blue

He also continued, slamming the narrative which the Black Lives Matter movement often espouses. The demonstrator explained that claims about systemic oppression, racism, and police brutality are “[lies.]”
Black Lives Matter murals have popped up in various places across the nation since their latest protests and demonstrations, some of which have regressed into violent riots.