America Will Not Get a National Face Mask Mandate 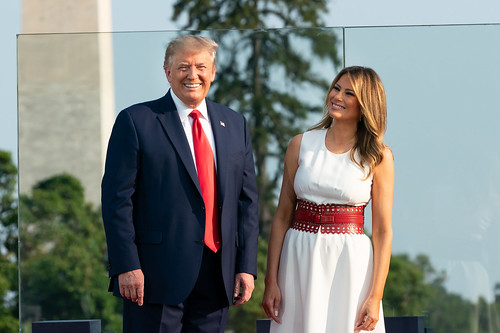 “Salute to America 2020” (Public Domain) by The White House

In the wake of talk about masking, the Trump administration is under the microscope. Proponents of forced masking are urging the president to sign an executive order mandating face masks for all Americans; however, the White House chief of staff maintains that a national face mask mandate will not happen, according to Fox News.

The Official Word on a National Mandate for Face Masks

On Monday, Mark Meadows, the White House chief of staff, sat down for an interview with Fox & Friends. During this interview, Meadows was asked about whether or not a national mask mandate is in order or if the decision of compulsory face masks should be left to local and state governments.
The White House chief of staff gave a very clear response. Per Meadows’ own words, masking is a “state-to-state issue.” He also pointed out that despite reports of increasing coronavirus cases, the true increase lies in testing for COVID-19.

This President is going to move aggressively to support and protect American workers as our economy recovers. He did it once. He’ll do it AGAIN. @realDonaldTrump https://t.co/XazxRFG47v

Meadows also stated that a national mask mandate is “not in order,” confirming that the Trump administration will allow mayors and governors to determine whether or not they want to “require” masks. Finally, the White House chief of staff also confirmed that President Trump is willing to put on a face-covering during times when he’s in “tight quarters.”

The Social Push and Pull

Calls for a national face mask mandate arrive as more Americans begin to resist ordinances that require face masks. Many individuals make the case that governors, mayors, and health officials have no legal grounds to order masking; others believe that mandatory masking will quickly turn into mandatory vaccinations.

To date, more and more lawsuits are coming against elected officials who order face masks. Other Americans are simply refusing to abide by mask mandates and boycotting businesses that enforce them.
President Trump himself has also maintained that he doesn’t believe a national face mask mandate is necessary.
What do you think about the idea of a national face mask mandate? Do you believe that such a mandate would violate the United States Constitution? Let us know in the comments section below!