Democrats regularly claim that the United States is inherently and systemically racist. These talking points are regularly made during elections with Democrats positioning themselves as the solution to the problems they allege are plaguing the nation. 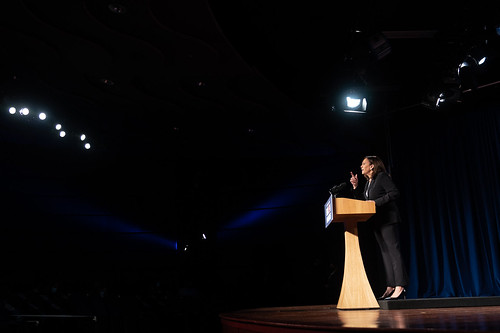 “Senator Harris Delivers Rebuttal to the” (CC BY-NC-SA 2.0) by Biden For President

Throughout the 2020 presidential election, Democrats have not deviated from their typical political patterns whatsoever. Joe Biden and his election team have repeatedly asserted that the nation is systemically racist, in spite of evidence to the contrary.
Now, a newly released ad from the Biden campaign writes off America and police officers as innately racist. Breitbart News also confirms that the ad wrongly claims black Americans as inherent victims.

What to Know About the Latest Ad from Biden’s Campaign

.@JoeBiden and @KamalaHarris in new ad declare "now is the time for racial justice"
Watch —->https://t.co/TbMMYVxWst

Biden’s running mate, Kamala Harris, is then heard citing a need for police reform in the United States. Harris then goes on to back the removal of certain police protections, such as qualified immunity. The former vice president then claims that America is at a crossroads with an opportunity to alter lives “for the better.”

Reactions to the Latest Biden Ad

Allies of the former vice president are already attempting to paint his latest commercial as a call for social justice. Individuals who share anti-police sentiments are also praising the ad, while agreeing with the various measures proposed by Biden and Harris.

Today marks exactly two months until Election Day. Let’s roll up our sleeves and keep making every moment count. Donate if you can. Volunteer to talk to voters. Tell your friends and neighbors what’s at stake.

It’s going to take a lot of hard work—but together we can win this.

However, many other Americans have taken issues with the misconceptions promoted by Biden’s latest commercial. A quick look at policing data simply doesn’t support the narrative that law enforcement is going out and harming African-Americans at will; as a matter of fact, more white Americans lose their lives at the hands of police officers than black Americans.
Biden’s newest ad arrives as he is set to visit Kenosha, Wisconsin today. The former vice president’s visit comes days after President Trump arrived to meet with Kenosha law enforcement and observe the damages engendered by nights of riots.
What do you think about Joe Biden’s latest campaign ad? Is it truly indicative of the United States and policing as a whole? Be sure to share your thoughts with us in the comments section below!