In recent weeks, the United States has borne witness to various left-wing groups ripping down statues and monuments.
For the most part, Republicans took action to nip this criminal behavior in the bud. Last month, President Trump signed an executive order that brings ten years of jail time upon individuals who vandalize or deface federal monuments and statues; Trump’s executive order also allows for the withholding of funding from cities, states, and police departments that fail to stop individuals from destroying or vandalizing iconic figures. 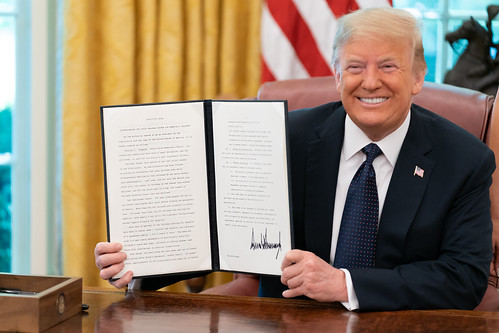 Likewise, House Minority Leader Kevin McCarthy (R) has announced forthcoming legislation to keep funding from states and localities without protection for their statues.
Despite these moves to end the destruction and attacks on memorials and statues, left-wing groups aren’t done. Conversations have developed about whether or not the iconic Mount Rushmore should come down.
However, a brand new poll from Rasmussen Reports confirms that most Americans do not favor the erasure of Mount Rushmore, explains Breitbart News.

According to the poll’s findings, support for Mount Rushmore is overwhelming. Fewer than 20% of Americans support removing this monument, while 75% oppose the removal of Mount Rushmore.

Support for Mount Rushmore also maintains across partisan lines. Over 60% of Democrats disapprove of axing the memorial while 88% of Republicans and 76% of swing voters share the same outlook. The opposition to removing Mount Rushmore also maintains majorities in other demographics including socioeconomic status, gender, race, and educational levels.

Yesterday night, President Trump traveled to South Dakota and gave remarks at Mount Rushmore. The president slammed far-left groups who seek to rip down monuments; the president also stated that the goal of left-wing agitators is to ultimately destroy the nation.

Prior to Trump’s address, protesters appeared and attempted to block individuals from crossing the road leading to Mount Rushmore. Shortly thereafter, the National Guard and other law enforcement members arrived on the scene, urging demonstrators to disperse.
Ultimately, President Trump’s address before Mount Rushmore was well-received by his audience and conservatives in general. At this time “#Trump2020Landslide” is presently trending on Twitter.
What do you think about the overwhelming, national support for Mount Rushmore? Do you believe we should tear down history or learn and grow from it? Let us know your views and takeaways down below in the comments section.